The UCSB Department of Art Visiting Artist Colloquium features nine synchronous Artist Talks that are scheduled each Thursday evening from 5:00-6:50 (September 22nd through December 1st) in UCSB’s Embarcadero Hall in Isla Vista (unless on Zoom). All lectures are free and open to the public. For directions to location, please see this campus map. 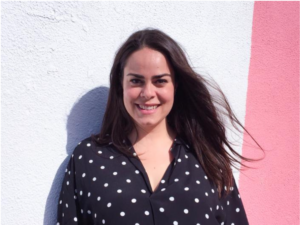 Alexandra Terry (she/her) is a curator currently based on the Central Coast of California. Most recently she was Chief Curator at Museum of Contemporary Art Santa Barbara (MCASB) where she organized solo exhibitions by artists Shana Moulton, Rosha Yaghmai, Genevieve Gaignard, and Barry McGee amongst others, and group exhibitions featuring artists including Paul Mpagi Sepuya, Gabriela Ruiz, and Simone Forti.

From 2008 to 2015 Terry was Curator at the MOP Foundation, a London-based art organization dedicated to promoting and supporting Iranian contemporary art. In 2009 Terry co-founded P.A.S.T. Projects, an art library and archive housed in The Woodmill artists’ studio and exhibition space in London. From 2010 to 2014 she was a member of the London- based arts collective GANDT, which took art writing as a starting point for a variety of curatorial, publishing, and performative projects.

Terry holds an MFA in Curating from Goldsmiths, University of London, and a BA in Fine Art from the University of Colorado, Boulder. 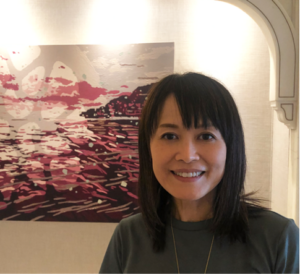 Yumiko Glover’s artwork captures the range of inspirations taken from her cross-cultural experiences, and the history and philosophies of Japan and the United States. Glover received her BFA from the University of Hawai’i at Manoa, and with the Chancellor’s Fellowship, she completed her MFA at UC Santa Barbara, where she was subsequently awarded the post-graduate Artist-In-Residence.

Glover’s work is part of the collections at the Honolulu Museum of Art and has been on view at various venues including the Los Angeles International Airport, Open Mind Art Space, Durden and Ray, and PØST in Los Angeles, Honolulu Museum of Art, Shangri-La Museum of Islamic Art, Culture & Design, and iBiennale 2019 in Honolulu, Westmont Ridley-Tree Museum and Sullivan Goss Gallery in Santa Barbara, Bryan Ohno Gallery in Seattle, and at Moremen Gallery in Louisville, KY,

Glover’s work has been featured in various publications including the United Nations’ 75th-anniversary publication (2021) as well as the cover art for the inaugural issue of UCSB Magazine (2021). Glover is currently based in Santa Barbara where she teaches in the Department of Art at UC Santa Barbara.