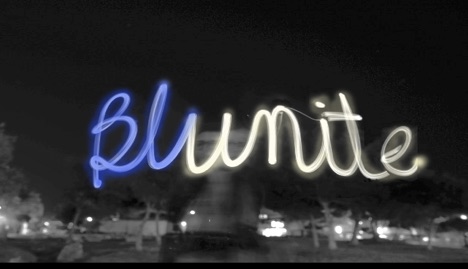 students community members on May 24, 24 hours after the shooting (Jae C Hong /AP)

This May commemorates the one-year anniversary of the 2014 tragedy that took the lives of six UCSB students.

Inspired by the 2014 student candlelight vigil that assembled some 5000 participants a year ago, BLUNITE is a community vision taking luminous form this May to help

Isla Vista residents come together once again to show their solidarity through light in the aftermath of darkness.

Beginning in early May, the half-square mile of Isla Vista will “glow blue” with LED lights, a signature of UCSB’s innovative research by UCSB Professor, Shuji Nakamura, who received the 2014 Nobel Prize for his blue LED invention this past October.

The massive social-media campaign by students invites local I.V. residents, as well as those out of town, to participate by placing affordable, $1 LED blue tea lights in their homes, Resident Halls and apartment windows; changing porch light bulbs and installing LED rope lighting to outline buildings and storefronts around the central downtown loop in Isla Vista.

Blue LED tea light will be available for free or $1 donation each for mass distribution (Kim Yasuda).

The trail of blue lights along Pardall, Embarcadero del Mar, Embarcadero del Norte will create a lit pathway that bridges UCSB’s Pardall Tunnel light installation by UCSB Media Arts Professor, Marcos Novak with the town center. The event will culminate with the artistic illumination in Isla Vista’s Perfect and People’s Parks of the I.V. Love and Remembrance Garden and a lit sculpture created by

In addition to households, businesses and public parks, campus and county buildings will also be lit up for the scheduled candlelight vigil on the eve of the May 23. The Pardall Student Center and Woodstock’s Pizza will be the first ‘blue beacons’ lit in the town center, followed by the I.V. Recreation + Parks District offices and IV Food Coop on Seville, who are organizing the lighting of their entire block, plagued a year ago by the deaths of 3 students.

The offices of the 3rd District Supervisor, Doreen Farr and UCSB administration will also light their buildings facing the parks, encouraging other communities in I.V., Goleta and Santa Barbara, as well as students, faculty and alumni from UCSB and SBCC to join in the effort. It is the hope that the lights will spread to residential neighborhoods all over town – helping this community to unite, to heal and to move forward through light.

“We wanted to create a beautiful, simple way for everyone, near or far, to participate. We felt that those who weren’t here last year like the freshman, as well as those who were, could join in the collective sense of unity that this will bring about”, states Madeline Berger, a theatre major and one of the students leading the campaign. Art Professor Yasuda echoes their goal for inclusion: “Individuals, such as UCSB alumni who can’t be present for the remembrance events may participate in some way by either donating to light more candles and/or by illuminating their spaces around the globe and then, to upload images in solidarity on Instagram, Twitter and Facebook”.

The students are seeking monetary and in-kind contributions to make candles available for purchase and free throughout the month. Businesses are stepping up to help. BluDot Trading of Poway, CA offered a bulk order discount of their submersible blue LED candles. David Cervantes, Manager of Trader Joe’s in Goleta, has already pledged to the campaign. “A large number of our store employees and clientele are UCSB students or graduates and it is so important that our businesses gives back in ways that help this community thrive.”

In addition to a donation, Cervantes will encourage his staff to help spread the word – and the light.

Donations, $$$ and in-kind, may be made in the following ways:

To donate, join and invite others to participate in BLUNITE IV:

BLUNITE Isla Vista” will unite communities in IV, UCSB, the greater Goleta/SB County and beyond. Students of the IV OpenLab have launched the BLUNITE Isla Vista social media campaign to feature blue LED light and its artistic applications to illuminate the buildings along the Pardall Business Corridor loop to IV Perfect Park as a visible, connected pathway for the proposed AS-led candlelight vigil on May 23.

IV OpenLab students are working with UCSB administration, Associated Student groups as well as IV and Goleta businesses and residents to deploy the campaign, encouraging local and outsiders to host and sponsor blue lighting for IV interiors and exteriors as a show of solidarity during the anniversary month of May and thereafter with plans for BLUNITE Isla Vista to become an annual event each May.

For ways to participate and contribute to BLUNITE Isla Vista: